Can e-Signatures replace Digital Signatures?
Presently if someone has to digitally sign any document then one has to purchase pen drive, dongle to store the etoken from anyone of the authorised service providers for digital signatures. Alternatively one has to get key from online agencies and the same has to be stored in the personal computers. Both the procedures are susceptible to frauds and cost the individual anywhere between Rs.700 to Rs.2500.
Now with the introduction of e-verification of IT returns online, through EVC codes generated by using Aadhaar Technologies in India, has paved the way for revolutionary changes by switching from digital signatures to e-signatures.
What is eSign and How it is better than Digital Signatures? 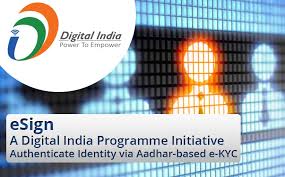 eSign is an online electronic signature service, in the live environment, which can be integrated with service delivery applications via an open API to facilitate any Aadhaar Holder to digitally and legally sign any document. It uses authentication of the Aadhaar Holder through e-KYC service and once the Aadhaar database in India is linked to live registrar of deaths and births then the e-signing will not be possible in respect of dead people and if the e-signing person is a minor then also the system will generate exceptions that the e-signor is a Minor, who can bind all other parties except  himself or herself.
Salient Features of eSign vis-a-vis Digi-Signatures:
Jio Mobile SIMs to use eKYC or Aadhaar bases authentication:
The latest use of esignatures by Reliance Jio to verify the authenticity of the applicants has brought about revolutionary use of esignatures being used for the following operations:
Limitations of eSigns:
Neither RBI nor any legal agency has not mandated in favor of eSignatures. RBI or any other agency has neither said that "You can use eSign - Aadhaar based authentication" or they have stopped by saying that "You can not use eSign - Aadhaar based authentication". It appears that effective changes will have to made to the Information Technology Act so that eSign facility through Aadhaar Based authentication becomes the most sought after Aadhaar Technology to enter into contracts by individuals competent to contract. To realise this dream minor changes may be required to link the imprisonment, blindness, lunatic or any other incapacitated condition of the Aadhaar Holder to send a warning signal to the other party that person esigning through Aadhaar based authentication is incompetent because he or she is either minor or blind, lunatic,  imprisoned or of unsound mind.
By reading this article still have you any doubt that Aadhaar can't change Destiny of India?
at September 13, 2016